The White Rabbit 5 is a magnificent Superyacht. This 61 metre, 3 deck trimaran was finished to the finest World Class Super Yacht standards.

Constructed by North West Bay Ships (Tasmania, Australia) Marine Dynamics was contracted to lay 500 square metres of teak decking. The decks were constructed in New Zealand at 's Auckland workshop from patterns taken directly from the boat in Hobart.

This was a huge advantage for NWBS as they were working to a tight building shedule and had a staff of over 200 working directly on the vessel. Not having to construct the decks in situ meant the overall job was more easily and rapidly complete

The Marine Dynamics team were split into two groups, one constructing the decks in New Zealand, the other fitting the decks in Australia when they became available. As sections of the deck were completed they were shipped and installed in stages.

Each deck panel was made to 12 metres (40 feet) by 1.2 metres (4 feet), so that they could fit into a shipping container. They were carefully packed and sent one at a time.

Once they arrived in Australia the panels were fixed in place and the margin boards were routed around the perimeter, caulked, sanded and covered with mdf sheets to protect them. Once the boat was launched they were given the final sand and the whole vessel was cleaned, ready to be handed over to the client.

The overall project was a huge success, highlighting that the Marine Dynamics system for fitting teak decks allows advantages in both flexibility and economy. 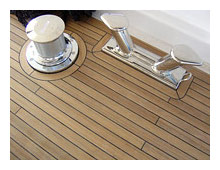 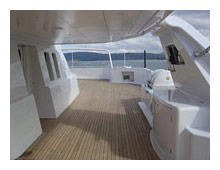 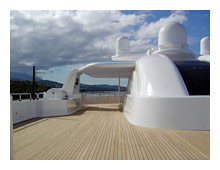 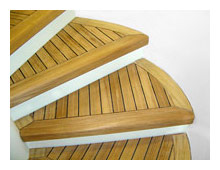